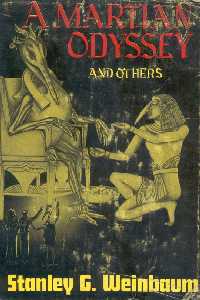 This time out, I’m going to take a brief look at one of the oldest and most valuable SF books in my collection, the earliest collection of short fiction by classic 1930’s SF author Stanley G. Weinbaum. I bought this book a long time ago from a UK used book dealer, must’ve been thirty-five years ago or more, way back when I was just becoming an obsessive book collector for the first time. It actually came as part of Weinbaum two-book set by the same publisher, Fantasy Press, the other book being The Red Peri, another collection of Weinbaum’s short fiction, which will also be the subject of the blog post after this one.

This collection is notable for containing Weinbaum’s most famous short story, “A Martian Odyssey” and its sequel, “Valley of Dreams”. There are also a few other good ones, including “Parasite Planet” and its sequel “The Lotus Eaters”, “The Mad Moon”, “The Worlds of If” and “The Adaptive Ultimate”. “The Adaptive Ultimate” has also been (if you’ll pardon the pun) adapted to film, television and radio a number of times over the years.

Overall, A Martian Odyssey and Others contains most of the best of Weinbaum’s short fiction, and, combined with the eight stories in The Red Peri contains almost all of the short fiction that Weinbaum wrote, with the exception of a handful of stories.

The dustjacket is in pretty good condition, considering its age, showcasing some lovely artwork by A. J. Donnell. As an aside, the edition that I have also bears a very interesting hand-written inscription/dedication on the front inside page. The inscription goes as follows:

“FROM SCIENTI-CLAUS 1955
FOR ALF GREGORY’S HG WELLSIANS
IN RESPECT OF THE MEMORY
OF THE GREATEST*
OF THEM ALL.

It’s an extremely sobering thought that, at the publication date of this book (1949), the Great Man (H.G. Wells) had only been dead a mere three years. 🙁

It looks like this book was bought as a Christmas gift for someone, and this dedication is a tribute to a H.G. Wells fan group active in the UK, possibly in the late-1940s and the 1950s. At least that’s the assumption that I’m making from this. I know that it’s a long shot, as we’re talking more than sixty years ago here, and this group may or may not have been anything more than a small local fan group. But does anybody out there have any information on an old UK-based SF/HG Wells fan group by the name of ALF GREGORY’S HG WELLSIANS? If so, I’d be very appreciative if you’d let me know the details.